Evolution of the traveling salesperson

Posted on November 9, 2014 by Andy Rundquist

The traveling salesperson problem is a relatively famous math/geometry/computer science problem. The version I’ll be talking about in this post is where the salesperson has to visit several points on a map, minimizing the travel distance. Repeating a point on the map isn’t allowed, though I’m pretty sure that would increase the distance anyways. I got thinking about this problem thanks to this great post showing how to solve this problem using simulated annealing.

My approach to solving this problems involves my go-to tool for lots of hard problems: a genetic algorithm. Basically I try a random set of solutions, rank them based on the distance each takes, and I randomly choose them (with weights determined from their “fitness” or distance) to make babies by mutating them (switching two points in the visit order). I make lots of babies and then choose the best ones to populate the next generation. This tool is quite versatile as you just have to define a fitness function that returns a rankable value and you have to carefully determine what the genome structure is and what mutation is. Then you’re off and running. Note that I didn’t do any sexual reproduction as I didn’t have any good ideas for how to do that in this situation (though my friend Jon Gaffney did send me some great resources for that).

I also decided to throw a wrench in. For fun I had the locations on the map slowly move around, using basically a random walk for each. I did that so that I can show this to my First Year Seminar students to talk about how evolution can handle a changing landscape (their summer reading book was Paleofantasy and their assignment was to find a connection between that book and engineering – most are either agreeing or disagreeing with the notion that evolution is an example of engineering).

Each frame shows the best candidate after each generation. The number is the current length of the path

And here’s a plot showing the fitnesses of every candidate in every generation: 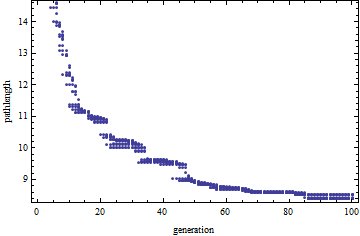 fitness (path distance) versus generation. For each generation, all the distances are shown as blue dots

As you can see, it converges rather nicely, thought the spread in candidates never goes to zero because the dots are constantly moving. To show that it can handle an abrupt change to the environment, here’s a gif showing a situation where the points are randomly shifted to a new location halfway through:

The points randomly shift halfway through

and here’s the plot of the fitness versus generation (note the spike when the points move): 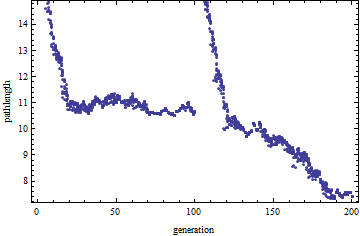 the points shifted halfway through

Finally, I thought I’d have some fun with river crossings. I decided to see what would happen if I put in some rivers (line segments) and charged a huge cost (10 meters) for crossing them. Here’s an example:

Here the plot of fitness versus generation really just shows when extra crossings get added:

fitness versus generation for the river crossing version

So, how can we quantify the value of this approach. Here’s on way: compare to a blind hunt. I could just randomly create paths (really just randomizing a list of integers from 1 to the number of points) and constantly check their fitness. Here’s what a histogram looks like for a set of points with a “best path” fitness around 9: 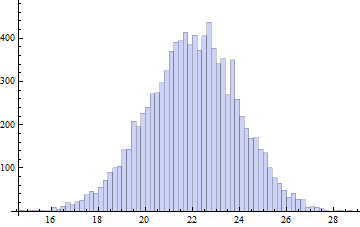 histogram of 10,000 random guesses for a set of points with a “best distance” of roughly 9.

Note how gaussian it looks. It has a mean of 22 and a standard deviation of about 2. That means that the “best” is more than six standard deviations away from the mean. What are the chances of getting that randomly (assuming the normal distribution holds, which is surely doesn’t but whatever)? That’s just a relatively straightforward statistics calculation that leads to an answer of 37 billion to one against. Another way to say it is that you’d have to run billions of random tests to have a decent chance of getting a “close-to-best” path.

Now, that last paragraph suffers from a huge assumption about the distribution staying normal (or gaussian), so here’s another way to think of it. My genetic algorithm runs 200 generations with 50 kids per generation. That’s 10000 different tests. What percentage of all the possible paths is that? Well that’s easy: 10000 divided by 20 factorial (because I’m currently using 20 points). That gives a value of 0.000000000004% (also known as basically zero). So I think the genetic algorithm is doing a very efficient job for this problem.

Thoughts? Here’s some starters for you:

Professor of physics at Hamline University in St. Paul, MN
View all posts by Andy Rundquist →
This entry was posted in fun, math, mathematica. Bookmark the permalink.

11 Responses to Evolution of the traveling salesperson