Fair Asymmetric Dice, getting there

Ever since my son and I worked on whether different types of 20-sided dice were fair I’ve been thinking about whether there might be some oddly shaped dice that could still be fair.  I’ve watched these three numberphile videos and I’ve looked at these dice. All of which seems to suggest that if you have identically shaped sides, you’re in business. But I’ve still been wondering about other weird shapes.

So I’ve decided to see if I can search for some. This post lays down things I’ve discovered as I’ve geared up to a huge optimization run [SPOILER: I haven’t run it yet]. Here’s the list:

Given that it’s late on a Sunday night, I think I’ll just show some of my results (graphics and animations below) and see what sorts of questions folks have:

Rebound velocity of stick: This shows the rebound velocity of the center of mass of a stick that has symmetric masses on it. (think —0—-0— or 0———–0 or -0———-0- etc) where the position of the masses as measured from the center is the x-axis. Note that where the velocity crosses zero is the point where the stick would only rotate after the first bounce and therefore the motion would be totally symmetric (it would ultimately bounce right back up with the opposite angle with respect to the horizontal but without any rotational energy). 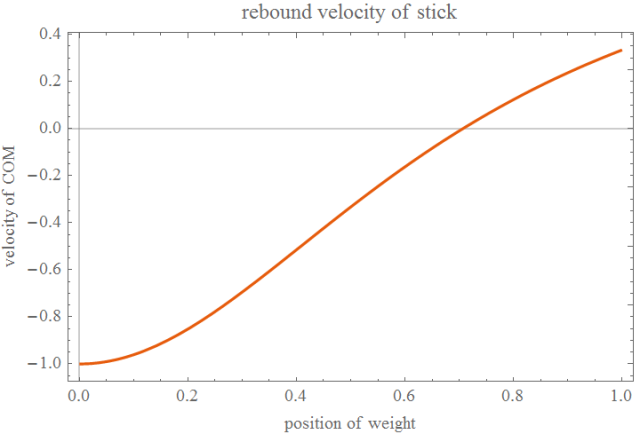 Success bouncing a 2D shape. After finally giving up on the WhenEvent approach in Mathematica, I just said that any vertex that goes below the ground needs to experience an upward constand force. The horizontal line is the original height of the center of mass.

Showing that you really do get different rolls with a triangle. Note that now I’ve added in some friction.

Histogram of 100 rolls for that triangle. You can tell than 100 rolls isn’t good enough since surely eventually side 2 should land more often. 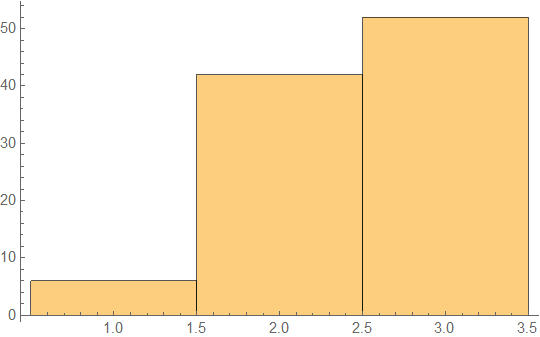 A 4-sided shape and accompanying histogram after 1000 rolls (note that each roll takes 0.5 seconds). 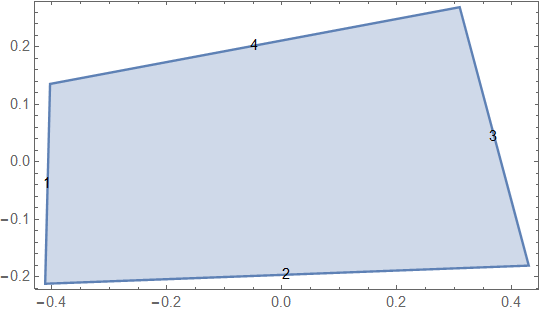 Combing through the data I found one of the rare ones where it lands on side 1:

Ok, I got 3D bouncing working!

And I can do lots of sides!

Here’s a 16-sider with some nice color added.

Here’s a 6-sider comparison showing a soft (top) and hard (bottom) floor. Note the difference in the ultimate side that ends up down.

Here’s a plot of the side that’s down as a function of time for the animation above. The blue curve is the soft surface and the red curve is the hard surface.

Ok, so I know I haven’t put much detail in yet, but I wanted to at least get down some of what I’ve been working on. The next step is to check some of my assumptions with you fine readers and then to go ahead and do some long optimization runs. I was thinking of doing a genetic algorithm, but then I’d need a ton of runs (keeping in mind, of course, that each roll takes a while (0.5 seconds in 2D, 2 seconds in 3D).

So some questions for you:

So, can you help? Here are some starters for you:

Professor of physics at Hamline University in St. Paul, MN
View all posts by Andy Rundquist →
This entry was posted in fun, mathematica, physics. Bookmark the permalink.

7 Responses to Fair Asymmetric Dice, getting there