A while ago I set about trying to find asymmetric dice that might be fair. I’ve put a lot more work into it, but mostly because there’s been a lot of interesting tangents. Here’s the main thrust of the project:

Here are a few examples of 7 contiguous regions on a 46 sided die:

As you can see in the previous post, I figured out how to roll 3D dice. I figured I could just roll a die a bunch of times, find the histogram of rolls, and be off and running.

But then I hit a problem (the first of many!). I needed to make sure I randomized the initial conditions of the roll. I figured I could just randomly orient the die before the roll begins. However, I started to notice odd histograms. I double checked things by rolling perfect platonic solids. Here’s the histogram of the probabilities of landing on each side of an 8-sided die where I randomized the die by picking a random axis and a random angle to rotate around that axis:

Oops! See the problem? Wow it took me a while to figure that out, but I finally did, thanks to the discussion on page 108 of this link. It turns out that picking a random axis and rotating around it randomly quite often leaves the original north pole in the northern hemisphere. Ok, so then I just did random Euler rotations: 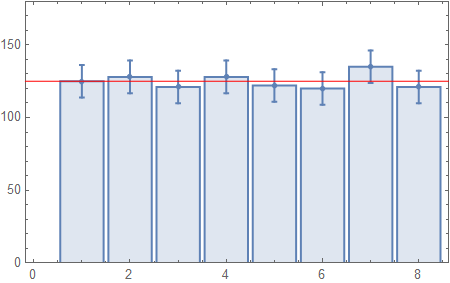 This time showing the expected even line and the standard deviations based on the number of rolls. Ok, cooking with fire, right? Nope.

So I moved onto larger dice and thought I’d be ready to go. But I discovered that I would often get sides that would never roll. I wondered what was going on and found out that a randomly generated die often produced sides that were unstable. First let me explain how I produce a random die: I pick, say, 25 random points on a sphere and use Mathematica’s ConvexHullMesh to turn that into a 46 (or 2n-4) sided die. Next, what do I mean by unstable? What I mean is that when you put that side flat on the surface of the table, the center of mass of the die is not directly above it. If that happens, it’ll always tumble away from that side.

Ugh, so that meant I had to carefully figure out which “random” initial points on the sphere that I could use so that all sides had at least a chance of rolling. I figured that it’s probably best to stick close to dice that have the vertices roughly evenly spaced, so I started digging into how to do that. This site helped a ton. In particular, it talked about how you could treat the vertices as charged particles and find distributions of the vertices that minimize their potential energy. So that’s what I set out to do.

Here’s a vid of starting the vertices randomly and letting them move under the influence of their mutual repulsion along with some viscosity (so that they’d settle down near a stable point):

That looked great, but then I did a side-stability test and found that, while the energy had effectively been minimized (to my satisfaction, at least) there was still a pesky side that was unstable! It’s hard to see, but here are two images that highlight the unstable side. In each, there’s a blue line drawn from the center of mass of the die (which isn’t the center of the sphere that all the vertices lie on!) perpendicular to the face of the offending side. If that line pierces the face, then it’s stable. You can see in the zoom image that it’s just barely unstable:

Cool, huh? I was excited that maybe there was some weird physical thing going on here until I reran the energy minimization with different (random) initial locations for the vertices. When I did that, the final die was fully stable. Still, that’s pretty interesting that it can sometimes not quite be fully stable.

So what’s next? I’d like to take a fully-stable die and do the contiguous regions analysis. I haven’t run the thousands of rolls it takes to get a good histogram, but this analysis of a 36 sided die shows good correlation: Red: probability of rolls, Green: solid angle of side as seen from center of mass, Orange: area of side, Blue: volume of cone from center to each side. It should be noted that this die had a few sides that were unstable, so I think that’s why the correlations aren’t great.

But with that, I think I’m excited to use this 46-sided die (this is a graph of the area of each side):

UPDATE: Here’s the same graph as above but for a fully-stable 36-sided die (Again: Red: probability of rolls, Green: solid angle of side as seen from center of mass, Orange: area of side, Blue: volume of cone from center to each side):

Your thoughts? Here are some starters for you:

Professor of physics at Hamline University in St. Paul, MN
View all posts by Andy Rundquist →
This entry was posted in fun, mathematica, physics. Bookmark the permalink.