This January I’m teaching a 4-wk intensive course called “Hamline Mythbusters”. On the first day of class I verified my assumption: this would be the last science class ever taken by nearly the whole class. They’re almost entirely seniors (the class filled in 10 minutes on the first day of registration) and they’re using this class to fulfill our disciplinary breadth requirement. I’ve been doing a few fun things in this course and I just wanted to get a few of them down here.

On estimation days the students work in groups to determine things like “how many piano tuners work in the twin cities?” or “how many gallons of gas are used in the US every year?” My grading scale is determined by:

which is the same as saying a letter grade off for every factor of 3 you are off from the actual answer.

We’ve only had one of these days so far (the gas question) and I was really pleased with the result. Out of the 11 teams, only 2 were more than a factor of 3 off and both of those were due to a simple mistake where they multiplied by average gas mileage instead of dividing. It took the slowest team an hour so next time (tomorrow) I’m going to do multiple ones so that the groups can divide and conquer.

The connection to science is just developing a good number sense and to realize that they know a lot more than they think they know. By the way, I put a box at the front of the room so that they couldn’t just google all the answers: 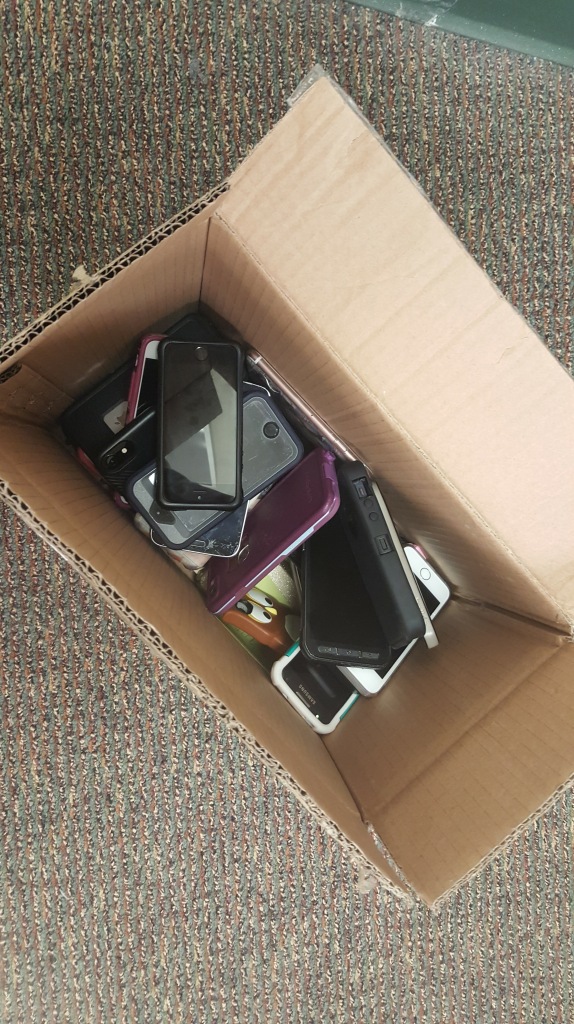 The day before debate day (actually on Friday to prep for Monday) they are told to bring in 2 pro and 2 con sources for debate day. On our first debate day we did “The US should use nuclear power for it’s dominant source of energy.”

In class they broke into the pro and con teams (randomly) and were tasked with finding 5 main topics and to break into groups to develop good quotes from their sources about their topic. Each group in the main debate was responsible for presenting one new idea and rebutting one idea from the other side. The debate ran: pro new idea, con rebuttal, con new idea, pro rebuttal repeat.

I mostly enforced the rule that when they presented they had to basically just read from their sources. This really worked well! My only complaint is that they didn’t really attack each others’ sources’ authenticity.

I graded the efforts with 50% of the points for turning in their annotated sources (making clear which quotes they used) and 50% based on a reflection paragraph on who won and how the authenticity of the sources affected the debate (the consensus was that it didn’t).

I told them to familiarize themselves with Randall Monroe’s What If blog and to prepare a blog post of their choosing. I’ve graded the first drafts so far and they’re all doing some pretty interesting things, ranging from picking on Trump through ice in place of sidewalks to having all cats disappear. I’m encouraging them to really take things to as many new levels as they can. They’ve got some work to do on future drafts, including drawing some funny/ironic cartoons, but I’m really excited about where this is going.

Borrowing again from Randall Monroe, I’m asking them to submit an explanation of a scientific or technical things using the 10 100 most used words in the English language. That’s what they’re doing peer editing on as I type this post.

We talked about the analogy between a scientist needing to change her vocabulary when talking with the general public and them having to do this assignment. We talked about possibly allowing a glossary where they could introduce new words that must be defined using the 10 100 words.

Lateral thinking puzzles are those party games where you lay out a situation and the audience has to ask yes/no questions to determine the whole story. Here’s an easy one: 5 pieces of coal, a carrot, and a scarf and found on a lawn. There’s a logical reason why they’re there, what is it? The answer is that a snowman melted.

I’m using them sparingly (ok, I did 3 of them today) because I think they are good practice for the questions they need to ask themselves during their mythbusting explorations. To do well at lateral thinking puzzles you have to constantly question your assumptions and double check what you think you know. Sound familiar? I think it’s quite similar to the traits of good scientists!

Ok, that’s all I’ve got for now. It’s a fun class, though the grading is killing me. Do you have any thoughts? Here are some starters for you:

Professor of physics at Hamline University in St. Paul, MN
View all posts by Andy Rundquist →
This entry was posted in syllabus creation, teaching, Uncategorized. Bookmark the permalink.